November 11, 2013Elizabeth Singler
I love to eat. My kids love to eat, and so does my husband. We eat very well for a family of 8. In fact, I will quite often make meals that are so huge that I have to find families to give dinners to. One of the reasons that we eat so well is because God has blessed me with a mother who'll try almost anything. I have learned well from her. Since my husband is also great at trying anything, I am always open to new ideas. My latest attempt at trying something is sure to be one that I will repeat: Making stock from chicken feet. I know that the first thought is “OH MY GOSH, REALLY!?!!?”, but when you get past that, it's smooth sailing.
I raise my own chickens and butcher them myself. I have read that chicken feet are the 'greatest thing for broth', but because I was unclear on how to clean them, I threw them in the carcass pile. When you butcher 25-30 chickens at a time, that's a lot of chicken feet that could be saved, yet because of my uneducatedness, I simply tossed them to the coyotes.
Chicken feet are very high in chondroiton and gelatin. If you have any joint pain or arthritis, you KNOW what I am talking about. This is for you.

I will typically make one to two chickens on an average week. Each chicken gets about 3 meals out of it.
Of all of these three days, I still end up wishing that I had more stock. If you have to add water to a base (stir fry, soup of any kind, scrambled eggs, etc), you should be adding stock. It makes the most incredible food that you can put into your mouth. Not only good tasting food, but highly nutritious as well.
Recently, I had a friend talking about how she had multiple bags of chicken feet to make stock out of. I had already read that they were awesome for that purpose, and when she expanded on the subject, I KNEW that I needed to try it. When she saw that I was interested, she gladly gave me 10 lbs of chicken feet. TEN POUNDS! I thawed them and quickly went to work.
These chicken feet were directly from the butcher that she takes her home-grown chickens to. Since I butcher my own, I will have the extra step of blanching them first to do anything with, but I wanted to share my first experience with you.
Since there were 10 lbs, I decided to make the chicken feet in two separate batches of stock. The first batch went right into the pot. The second batch I baked for an hour and added vegetables and seasoning to.
The first batch that went into the pot turned out to be okay. It was rich tasting, but it smelled terrible. I was expecting it though. I don't know if you have ever cooked a chicken all night without seasoning....you wake up to a dreadful smelling meat. I hate it. I almost always add a bay leaf and celery to my chicken bones when I cook them all night to avoid the scent.
The nice thing about the first batch was that it was quicker to get into the pot.
The first thing that I did was thaw the chicken feet. Then I set up my working station.

If I was going to butcher my own chickens and start from the beginning, I would pile all of the chicken feet into a 5 gallon bucket. Then I would pour boiling water over them. I would put in dish soap and stir. Once it was cooled enough to touch, I would take one foot at a time and peel the yellow skin off of each foot. At that point, I would rinse them and freeze them until a later date.
Since these ones came from the butcher though, the chicken feet are almost cleaned off already.
Each chicken foot has a soft pad at the bottom. For some reason, this pad gets a bit gnarly at times. If it's gnarly, take a sharp knife and slice part of the pad off to cut off the offending gnarliness. Put the nasty part in the “junk container”. 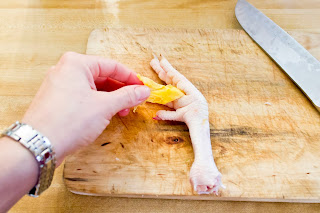 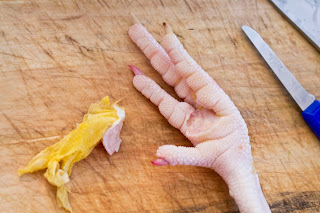 The next step is the toenails. I have read mixed things about them. Some people say “why not leave them on if you are going to strain it later anyways?”. Other people say, “cut the nails off and open up the cartilage at the same time for a more wholesome broth”. I went with the latter and chopped them off. This was the hardest part for me. Not only was it a daunting task until I got the hang of it, but the chicken feet resemble human hands too much. I might skip this step in the future.This was not an easy task until I figured out the best way. When slicing off the end of each toe, simply cut at an angle, just beneath the toe nail. This will keep your blade sharp and will go faster than chopping through any bones. Put the toenails in the “junk container”. 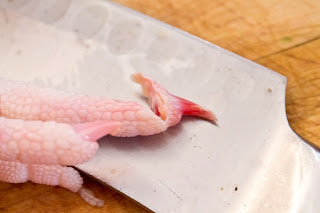 Put all of the chicken feet into a large bowl and rinse. Rinse. RINSE. 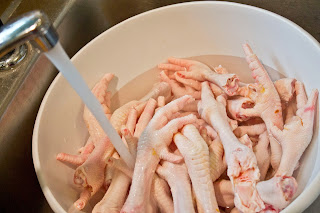 At this point was where I deviated both times. The first time, I simply put the feet into the pot.
Place the chicken feet in a large pot. I am using my pressure canner/cooker for this. Mine is a Presto 23 quart canner. I love it. It is aluminum and although I was worried at first about cooking in it, I am moving past that. Place the bottom rack inside, put the chicken feet on top and fill with clean water until the canner is 2/3 full. 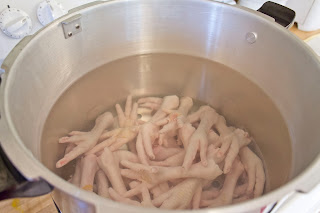 The second time, I put the feet on a cookie sheet and placed them in the oven at 350 degrees. I baked them for an hour. 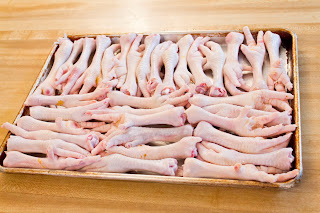 Overall, I liked the flavor better of the ones that went into the oven to bake. The broth also has more color and seems to be richer. I will probably do this method more than "straight pot" chicken feet method. 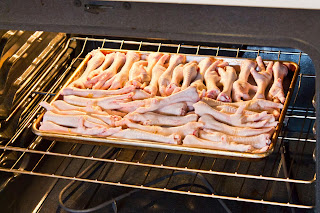 Bake those chocken feet for about an hour at 350 degrees. It will smell like a roasting chicken. Pull the legs out after an hour. The color will be slightly browned and the skin will look translucent. Chicken fat will also be on the cookie sheet (rather than in your stock...woot!). 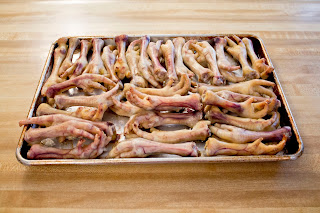 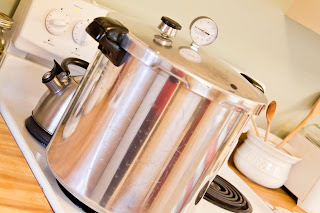 When the pressure gets up to 15 lbs, hold it there for 15-20 minutes. I have seen other recipes that say to cook at 15 lbs of pressure for 10 minutes. I personally like to a little bit longer. Just because. 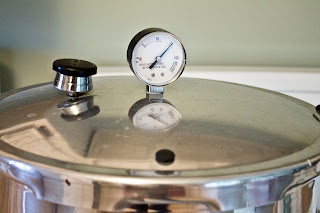 After 15-20 minutes, shut off the heat. Wait until the pressure canner completely de-pressurizes before touching. When you remove the lid, this is what the stock will look like. I have seen that some people remove the top layer of fat....and some people keep it. It's personal preference. Do skim the scum off of the top though. It is full of impurities that you don't want in your stock. 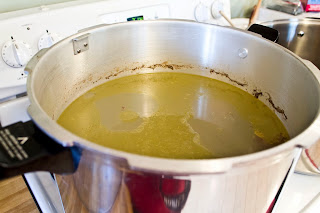 Strain the stock and put into freezer bags when it is cooled. You can also can this stock easily by following your pressure canner directions. Only can meat products with a pressure canner to manufacturer directions. NEVER try to wing it. *Ha ha...wing it.....or 'foot' it*.
I hope that you enjoyed this tutorial! Thanks for joining me!
Chickens Homemaking Homestead
Tweet

* Comments must be approved before being displayed.
Previous
Next

Use this text to share information about your brand with your customers. Describe a product, share announcements, or welcome customers to your store.

Enter your email address below to join our mailing list and have our latest news and member only deals delivered straight to your inbox.

Select a collection for this section using the sidebar.